Skip to content
A great plan can be ruined by the lack of just a small measure of patience.”
– Confucius

The Robert & MeiLi Hefner Foundation presently supports long-term programs at The Webb Schools in Claremont, California and at Harvard’s Belfer Center for Science and International Affairs in Cambridge, Massachusetts.

The Webb Schools – Raymond M. Alf Inspirational and Unbounded Teaching Chair in Science and other Endowments 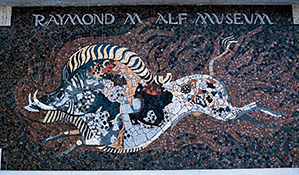 Robert A. Hefner III ‘53 attended Webb School of California where he was especially motivated and inspired by his biology teacher Dr. Ray Alf, whom he credits for his decision on a career in geology. Dr. Alf’s enduring legacy is one of energy, courage, inspiration and unbounded creative thinking and many graduates assert that they learned to think through his emphasis of hands-on, exploratory learning and intellectual risk-taking.

In honor of Dr. Alf and his legacy, Hefner established the Raymond M. Alf Inspirational and Unbounded Teaching Chair in Science in 1998. Designed to encourage creative thinking in science, this fully endowed chair provides a competitive salary and benefits package to an innovative, energetic, and unbounded science teacher to carry on the highest of standards for a Webb teacher.

In 1998, Hefner established an endowment for Excellence in Science and the Unbounded Thinkers Symposium with the goal of inspiring Webb students to explore new opportunities. Additionally, in 2000, the Hefner Observatory at Webb Schools was newly rebuilt with the dome’s construct and technology upgraded through the bequest of Robert A. Hefner III. 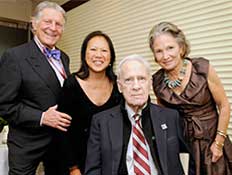 The Robert & MeiLi Hefner Foundation is the principal donor to the James R. Schlesinger Professorship of Energy, National Security, and Foreign Policy
By Graham Allison Director, Belfer Center for Science and International Affairs

Harvard Kennedy School, Belfer Center Director Graham Allison spearheaded the campaign to create a Harvard professorship in honor of James Schlesinger to honor his lifetime of extraordinary achievement and his service as a model public servant. Schlesinger’s long list of responsibilities included his role as chairman of the Belfer Center International Council, former Secretary of Defense from 1973-1975, former Secretary of Energy under the Carter Administration, and former Director of the CIA in 1973 to name a few. Here, Allison reflects on Schlesinger the man, and on how an institution like Harvard comes to honor him:

Why will there now be in perpetuity a James R. Schlesinger Professorship of Energy, National Security, and Foreign Policy at Harvard? There was no such position last year, or a decade or one hundred years ago. But there will be one hundred years hence. Why does Harvard have no Franklin Roosevelt Professorship of Government? No Theodore Roosevelt Professorship? The inconvenient truth is that the reason why—and the only reason why—is that donors gave Harvard money to establish the one, and not the others. Most students and faculty members at the University take for granted the opportunities Harvard provides.      Read the full article