Skip to content
The positive thinker sees the invisible, feels the intangible, and achieves the impossible.”
– Winston Churchill 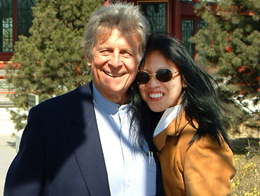 MeiLi and Robert A. Hefner III are both business entrepreneurs and philanthropists.

Robert is a geologist, geophysicist and pioneer in ultra deep natural gas exploration. As founder and owner of The GHK Company in Oklahoma, a privately-owned investment firm with its roots in natural gas exploration, he led the technological innovation necessary for GHK to drill many of the world’s deepest and highest pressure natural gas wells. Beginning in 1984, Hefner became the first foreigner to be asked by China to assess the potential quantities of the country’s natural gas resources. While there he began collecting local artwork which would later become The Hefner Collection of Chinese contemporary art.

Hefner is a Fellow of the Royal Geographical Society in London, a Fellow National in The Explorers Club, Member of the International Council at the Belfer Center for Science and International Affairs at the John F. Kennedy School of Government at Harvard, and President of the Bradshaw Foundation. Hefner’s groundbreaking book The Grand Energy Transition – GET was published by John Wiley & Sons, with a documentary based on the book released in 2012.

MeiLi Hefner was born in Singapore of parents from Fujian and Guangzhou, China. She has a cosmopolitan background and has traveled and lived around the world for much of her life. Her professional career was with five-star international hotels as well as the creation of a successful company specializing in marketing, public relations and branding. MeiLi oversees The Hefner Collection and the Robert & MeiLi Hefner Foundation working closely with Robert in their production of organic wines at Ramiiisol Vineyards.