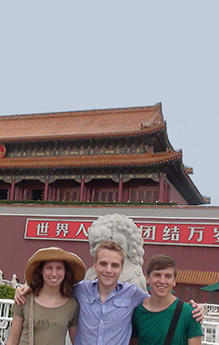 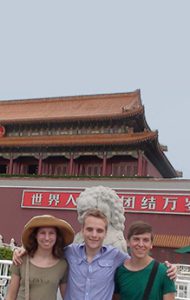 By 2012 Oklahoma School of Science and Mathematics Hefner Awardees, Alyssa Rudelis and Phil Burnett
Winter 2012, OSSM Parents Weekly
In July, we took part in a trip to China and Singapore. The two-week adventure, sponsored by the Robert and MeiLi Hefner Foundation, focused on cultural immersion. From living with foreign families to attending their schools, we can attest to our new-found cultural knowledge. This eye-opening journey began before dawn on one of many flights to our first destination.

We arrived in Singapore in the midst of pouring rain after more than 30 hours of flight. There were five in our group. We stayed in the dorms of the National University of Singapore High School of Math and Science. In terms of curriculum, residence life and general aspirations of the student body, we remarked on the similarities between OSSM and the Singaporean high school. While on the island, we as Hefner Awardees attended daily classes in chemistry, English, physics, biology and statistics. Outside of school, we explored the city’s sites, international cuisine and public transportation system.

After spending a few days at the school and becoming acquainted with our Singaporean classmates, we boarded a plane for Shanghai. The expected three-hour layover after arriving in Shanghai soon became only a hope. Due to historical flooding in Beijing, we and our guide were stranded in Shanghai for the entire night. The next afternoon, we arrived in the capital of the People’s Republic of China where we met our host families.